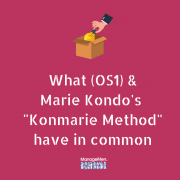 The Rise of Cleanwashing: Part II

Want to Reduce Turnover and Improve Productivity? Start by Listening.
Scroll to top