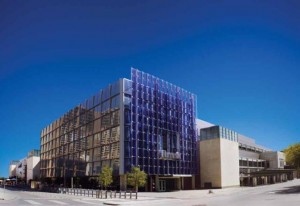 December 12, 2011. Austin, Texas – The Austin Convention Center is proud to announce that it has been awarded LEED® Gold Certification for Existing Buildings, established by the U.S. Green Building Council (USGBC) and verified by the Green Building Certification Institute (GBCI). The LEED (Leadership in Energy and Environmental Design) Green Building Rating System is the internationally accepted benchmark for the design, construction and operation of high performance green buildings, which was developed by the USGBC.

“We are tremendously proud of this achievement,” said Mark Tester, director of the Austin Convention Center Department. “Not only is the Austin Convention Center bringing economic benefits to the city of Austin, it is also a model of sustainability that will continue to set the standard in the industry. Credit certainly goes to the convention center staff’s dedication and commitment over the past four years to obtain the gold level, under the guidance of David Thomas, ACC Operations Manager, LEED-Accredited Professional and Certified Energy Manager.”

“We are proud to have one of the greenest convention centers in the country, said Bob Lander, president and CEO of the Austin Convention and Visitors Bureau. “This achievement signifies Austin’s commitment to the environment – and will further Austin’s reputation as a premier destination for meetings and conventions.”

The Austin Convention Center is located in the heart of the capital of Texas, eight miles from the airport and a short distance from 6,000 downtown hotel rooms. The convention center is just down the street from the city’s vibrant nightlife. As the Live Music Capital of the World®, Austin echoes with the sound of country, rock ‘n’ roll, blues, jazz and Tejano in over 200 venues, any night of the week.

A leading destination in Green meetings and one of the country’s most technologically advanced facilities, the convention center stretches over six city blocks and 881,400 gross square feet of space. It offers 370,957 square feet of meeting space including 246,097 square feet of column-free exhibit space divisible into five contiguous halls. Ballrooms of all sizes are included in meeting package options. The 43,300 square foot upper level Grand Ballroom offers space for over 3,000 to dine in style. The Center boasts 54 meetings room and show offices, located on all four levels, with over 58,000 square feet.