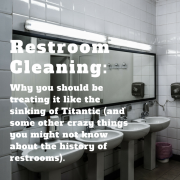 Note: In our “Closer Look” posts, we’ll take a deeper dive into the history of common products and technology used in custodial operations. If there’s a particular topic you’d like us to explore, just let us know!

It wasn’t until 16th century when the plague rocked England seven times in a 200-year span that people started taking a hard look at their cleaning and hygiene habits. The first flushing toilet was invented in 1596 by Sir John Harrington, a wealthy poet and godson to Queen Elizabeth I. Though innovative and not much different from the toilets we know today, royals never took to it because it was a fixed device in a room by itself and they were accustomed to having toilets brought to them. Additionally, the queen felt that having a room dedicated to using the toilet was lewd.

At that time, the type of toilet you used depended on your class. People in lower class societies used communal privies, which often resembled a bridge-like structure and was situated over a river. Individuals in the middle class used chamber pots, which was a basic bowl that allowed for some privacy and was later emptied into the street or river. Royals used fancy velvet-lined stools with a chamber pot situated inside the seat. The stools were brought to them by servants, who would roll them away once they were finished with them.

Several inventors contributed designs that are used in the toilet we all know today. This includes Thomas Crapper, who developed a patent for the flushing apparatus.

And contrary to popular belief that Mr. Crapper’s study of the toilet led to the development of the slang term “crap” as it relates to bodily waste, the term actually comes from Middle English origin and predates any reference to it as bodily waste. At least, that’s what Wikipedia says.

Today, restrooms continue to play a critical role in controlling sanitation and protecting public health. They require more chemicals, custodial products, labor, government regulation awareness and professional cleaning knowledge than any other area in a facility. Restrooms are at the very top of the list of cleaning priorities.

Restrooms are often a top area of complaints, and they also can host the most pathogenic microorganisms, including hepatitis, herpes simplex I and II, along with numerous blood borne pathogens.

We have two primary rules when it comes to managing restroom cleaning:

Thoughts on Rule 1: If that first impression is negative, it can mean a lost customer. A survey by Zogby International revealed that 80 percent of consumers would avoid a restaurant with a dirty restroom.

Thoughts on Rule 2: We recommend treating restroom cleaning during operational hours like the sinking of the Titanic. You wouldn’t grab all of your photos and put on your tuxedo before jumping ship—just the essentials for survival. The same goes for cleaning the restroom when it’s open—pick up trash and spot mop visible defects. Make sure all toilets are flushed, dispensers are stocked and all water is wiped from the countertops.

Clean restrooms indicate a commitment to quality. Make it a priority.