News
You are here: Home1 / News2 / Blog3 / The Heart of Cleaning: Recognizing the People Who Make It All Happen 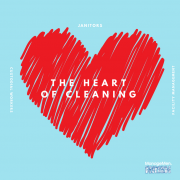 How Do You Measure Up? Using Audits as a Tool for Improvement