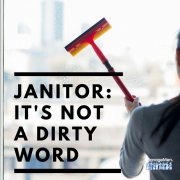 Let’s Take a Minute to Thank the Cleaners