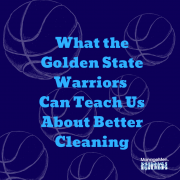 Earlier this week, Sports Illustrated magazine named the Golden State Warriors as their Sports Person of the Year. They are the fourth team to be recognized with the honor, following the 1980 U.S. hockey team, the 1999 U.S. Women’s World Cup soccer team and the 2004 Boston Red Sox.

“Our success is due to the contributions of every single player, coach and staff member in our organization; for Sports Illustrated to recognize this unique dynamic is truly special,” said Warriors President of Basketball Operations/General Manager Bob Myers upon receiving the notice of the honor.

In an industry such as ours, which is notoriously filled with inefficiencies, it can be beneficial to look to a successful organization like the Golden State Warriors for inspiration and ideas to improve the way we operate. One thing that stands out about the Warriors is how they are a team, both on and off the court. Everyone makes sacrifices and while there are star performers, each individual fills a very specific function within that team dynamic.

A lot of custodial operations operate use an individual-based approach, rather utilizing than the collective strengths of the team. This is called zone cleaning. Within this type of system, individuals are assigned to clean a specific area, performing all of the cleaning responsibilities within that space. So, a janitor might be required to dust and mop eat floor, empty trash, wipe down/disinfect surfaces and fixtures on the first floor of a building.

If the Warriors’ coach Steve Kerr were to apply that to his team, you can only imagine the results. At six foot three inches tall, Steph Curry is too small to play center and would never be effective under the basket. He’s a talented ball handler and shooter, which makes him better suited for a point guard or shooting guard position.

When you apply a team-based approach to cleaning, each individual has a specific job, much like the players on a basketball court. For example, a “vacuum specialist” vacuums all the surfaces throughout the building and checks that wastebaskets have been emptied. It’s much simpler and faster to train employees to perform those two tasks than it is to train them on a long list of jobs.

Yet the advantages go beyond training. The biggest advantage of team cleaning is improved productivity. Let’s say that you have to clean a 12,000 square foot building with eight floors. If one worker was assigned to each floor, performing every cleaning task over a four-hour period, it would require eight people, eight vacuums, eight trash barrels and eight restroom carts for the entire building.

In addition to fewer people and equipment, team cleaning has several additional benefits, including:

There are several things which experts attribute to the overall excellence of the Warrior’s legacy. This includes the versatility of its players, their skill, the number of great players on the team, their unselfishness and the respect everyone within the organization has for one another. Rise or fall, the team does so together. These attributes have led the Warriors to three NBA championships in the past four years, losing to the Cleveland Cavaliers in the 2016 finals.

At Janitor University, we teach janitors to always remember “if it is to be, it is up to me.”

Just like the Warriors, everyone on a team cleaning team is responsible for the success or failure of their team. And as a result, they are stronger—and more effective—together.

* For more information about team cleaning or to find a variety of resources designed to improve the way you set up and manage your team cleaning program, please click here.