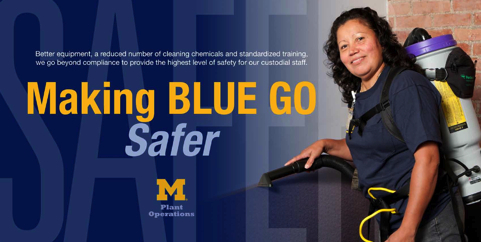 The ProTeam Super CoachVac was featured in a series of posters at University of Michigan to educate the community about the elements of the new cleaning program.

“We knew we were facing multiple years of reductions so we offered up 10% over 5 years with an understanding we would have a couple of years reprieve to protect our new program.” said Lawter. And since implementing (OS1), “We have met that 10 percent goal of $2.1 million and managed to improve services at the same time.”

With 200 facilities to clean covering a total of 15 million sq. ft., Lawter’s staff has gone from cleaning 36,000 sq. ft. per custodian to 40,000 sq. ft. per custodian, while improving the health of the environment. One of the biggest tenets of (OS1) is to clean for health first, then appearance. It was this and the simplified workflow that appealed to Lawter who wanted more consistency and fewer products.

“(OS1) was the only operating system we could find that was comprehensive and had been tested in a University setting for better than 10 years,” said Lawter. “We visited those programs as part of our due diligence and were impressed.”

In (OS1), custodians specialize in specific tasks, and they do all tasks of a single function at one time. This reduces wasted time switching tools and backtracking. Vacuum specialists may vacuum for an entire shift using a backpack vacuum designed by ProTeam® to reduce strain to the user.

“Dr. Berry’s study at the University of North Carolina showed us that, used properly, the backpack vacuum was a more ergonomic and effective product than an upright,” said Lawter.

“There’s no beater bar to throw dust around,” said Lawter. “It reduces the amount of dust particles in the air.” Two of Lawter’s staff who suffered from allergies reported their symptoms noticeably improving after switching to the backpack vacuum. ProTeam is partnered with the American Lung Association in efforts to educate the public about the importance of healthy indoor air.

Prior to implementing (OS1), the biggest problem Lawter faced was inconsistent performance, a symptom of the zone cleaning system they were using previously.

“No two custodians clean exactly alike,” said Lawter. “So, when one custodian is responsible for everything in an area, there will naturally be differences in the level of service. Our customers noticed those inconsistencies.”

According to Jeffrey L. Campbell, Ph.D., Chair of the BYU Facility Management program, Most custodial operations: “1) have no quantifiable standards; 2) are based solely on appearance; 3) have little or no method of measuring effectiveness and performance; 4) are not based on actual research; and 5) are driven by chemical and equipment manufacturers.”

Campbell recorded the story of the University of Michigan’s cleaning success along with the University of North Carolina and two other universities that implemented (OS1) in the article “Cutting Costs and Improving Outcomes for Janitorial Services” which appeared in the September/October 2011 issue of Facilities Manager and was reprinted in the Cleaning Gazette Newsletter the following May.

“In an industry that has been around as long as public buildings themselves, janitorial methods have seen little progress. As a matter of fact, most janitors today use the same tools and processes that were used 50 years ago,” said Campbell.

In addition to the timesaving backpack vacuums, (OS1) reduced Lawter’s chemical inventory from 50 products to less than 10. Individual use portion packs ensure that custodians get what they need and only what they need to clean every day. For Lawter, this hugely simplified the process.

“We used to have a committee of 30 people that would meet once a month and review the latest and greatest new products that came down the line,” said Lawter. “It was very inefficient, time-consuming, expensive, and led to a proliferation of products out there being tested by our workforce. ManageMen has a research and development arm for (OS1) users that does that, so I don’t directly deal with salesman. I love that.”

John Walker, President of ManageMen and progenitor of (OS1), explains how the echo chamber of product claims in the cleaning industry is rarely substantiated by science. “Everyone sells productivity tools. People buy them to save money and time, but they never document that they did it,” said Walker. “The University of Michigan’s janitorial department is a pioneer in documenting over $2 million in savings. They gave it back to the university.”

As reported in the Cleaning Gazette Newsletter last July, Sightlines, a prominent facility management assistance firm, did a thorough evaluation of the University of Michigan in the fall of 2010. They compared the data to a database of 300 institutions of higher learning and a group of 10 peer universities chosen by the administration.

This survey was taken in the midst of the (OS1) rollout at the university. The custodial department had not yet reached the 80-percent audit they hoped for. They were still rated as the number one organization in cleanliness evaluations. The study also showed high production rates and low cost of materials in comparison to their peers and the greater database.

“They got to a 2.5 cleaning level on a 3.5 APPA budget,” said Walker. “And in the Sightlines study, they beat virtually everyone in the country and in their peer group after adopting (OS1). There has never been a collection of data like this.”

In their most recent (OS1) audit last month, the University of Michigan surpassed their goal of an 80 percent audit, reaching 83 and 87 percent. According to Walker, it is the work of people like Lawter and his staff in documenting the effectiveness of (OS1) that will someday take the cleaning industry by storm. When cleaning is standardized, workflows are simplified, and productive tools are utilized, unbelievable savings are possible. “You can reduce costs and improve results with this documented system,” said Walker.