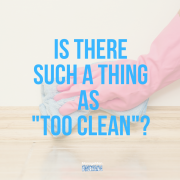 7 Deadly “Muda” or Wastes in a Cleaning Department

School Janitors: So Much More than a Line Item in a Budget
Scroll to top